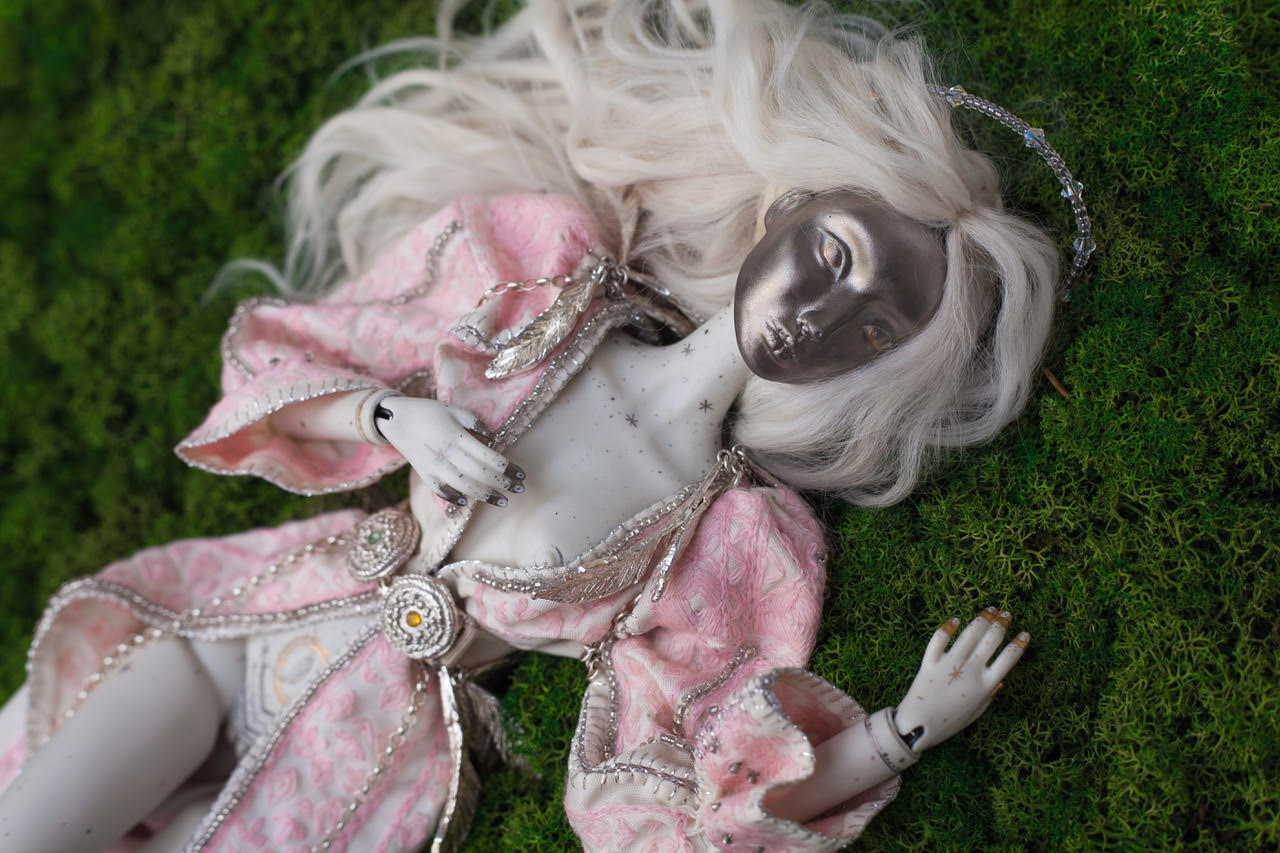 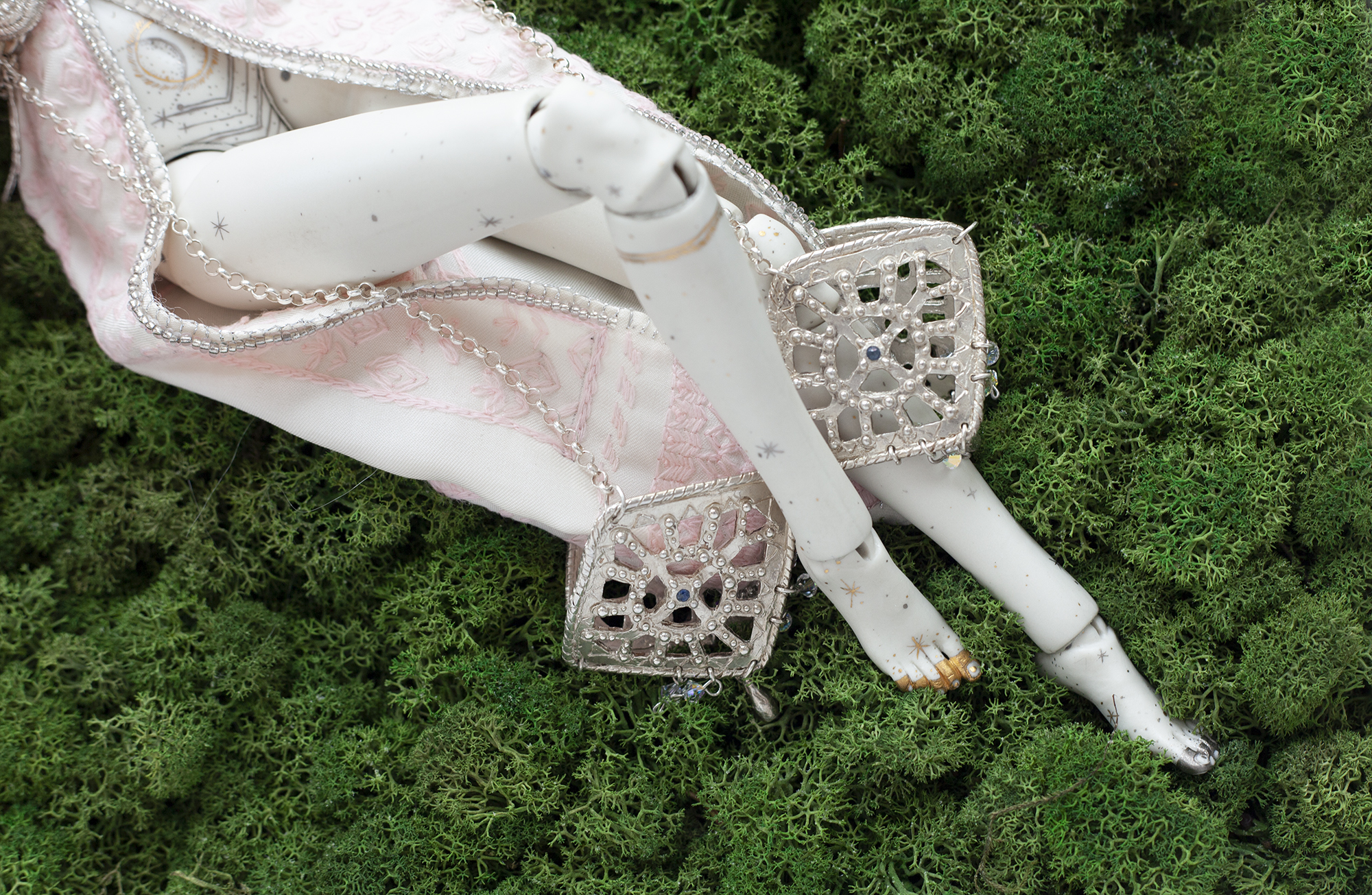 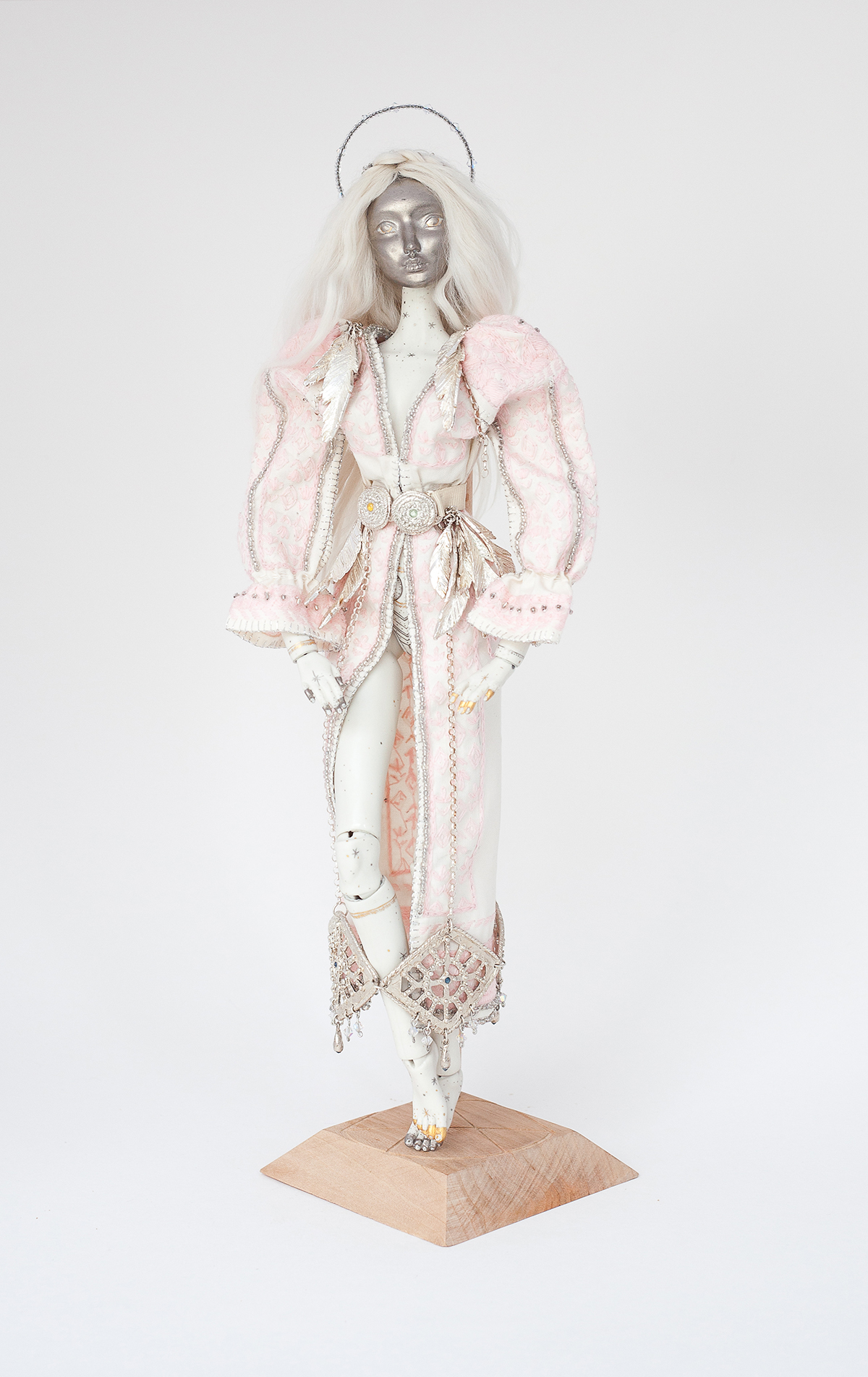 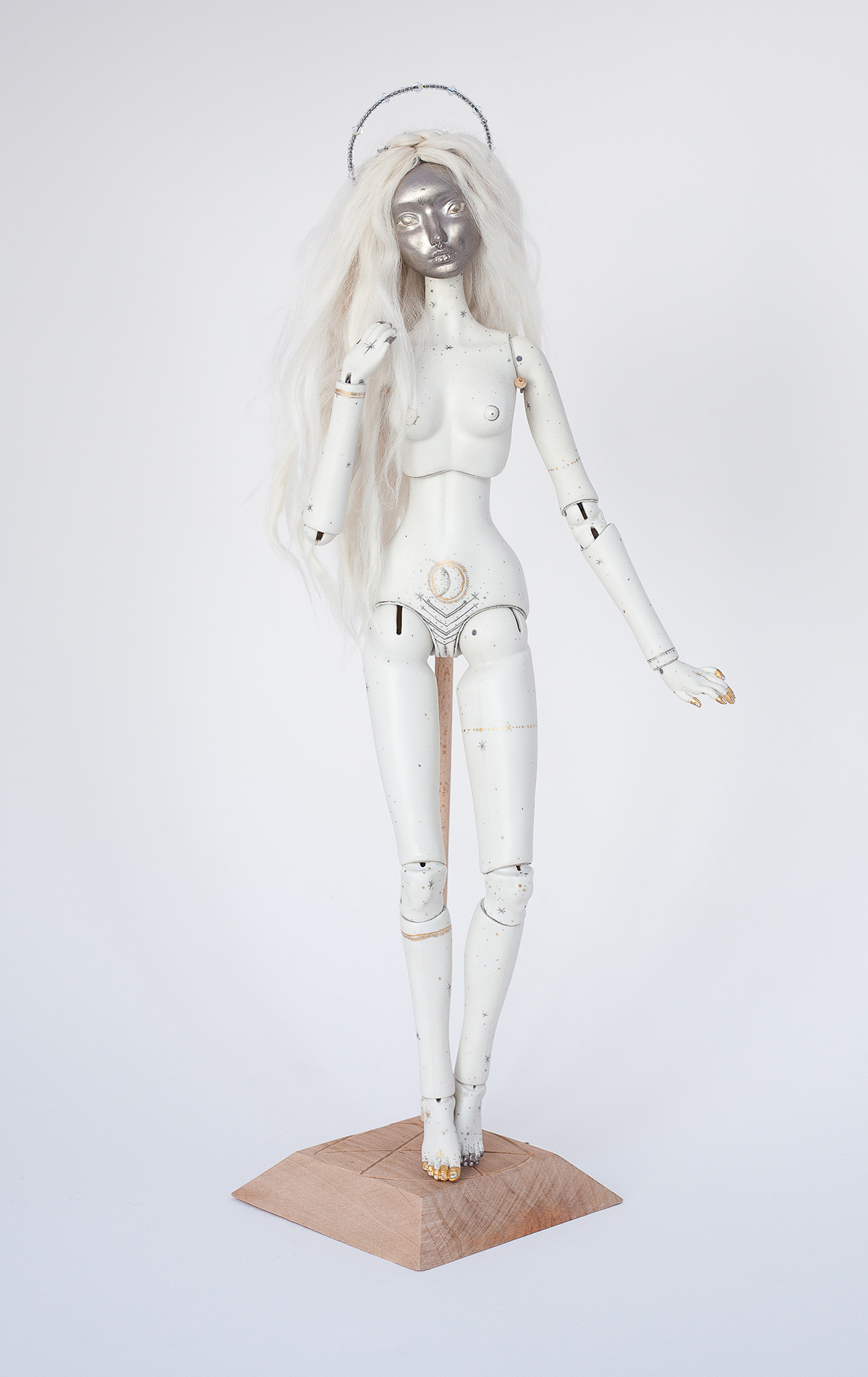 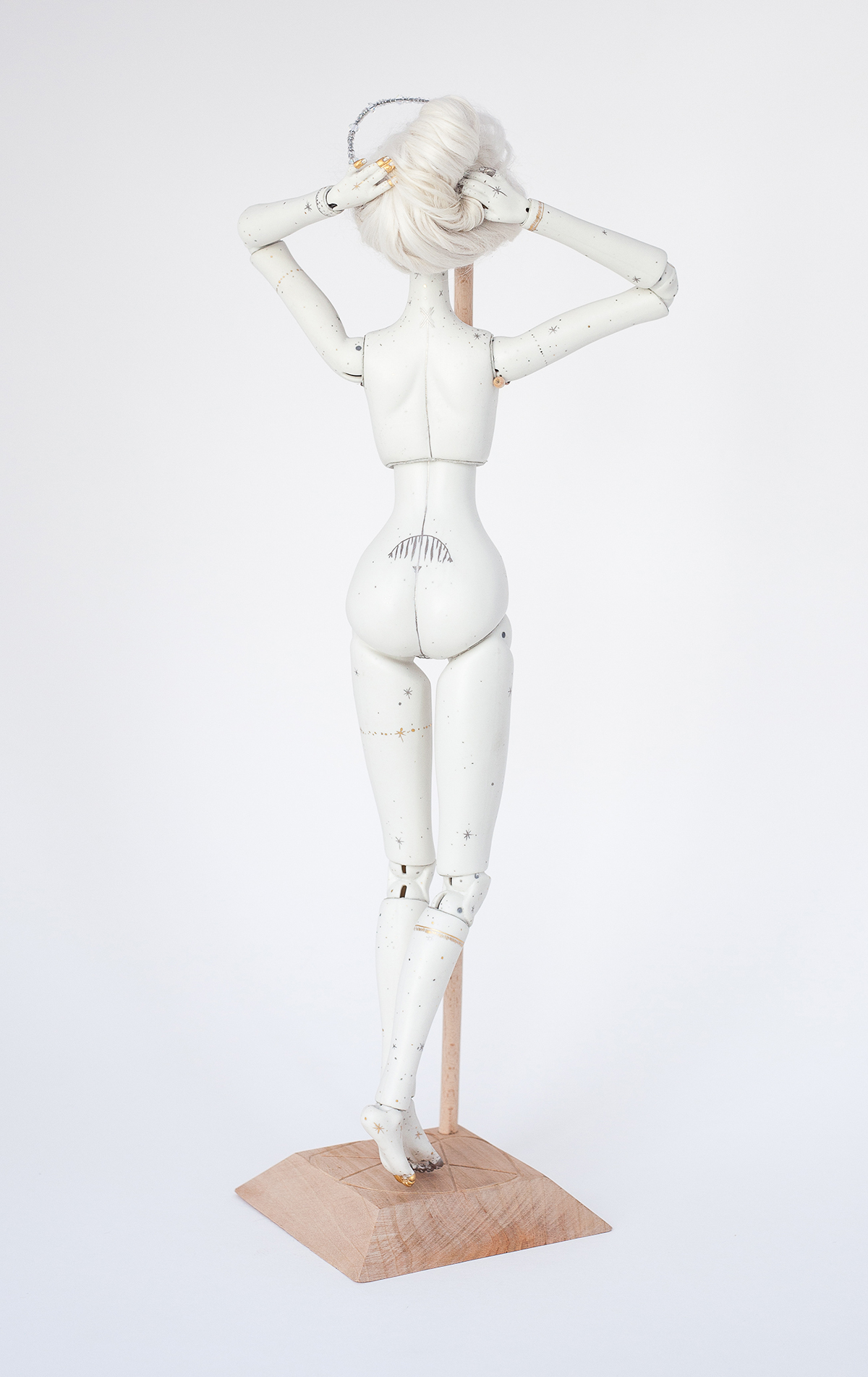 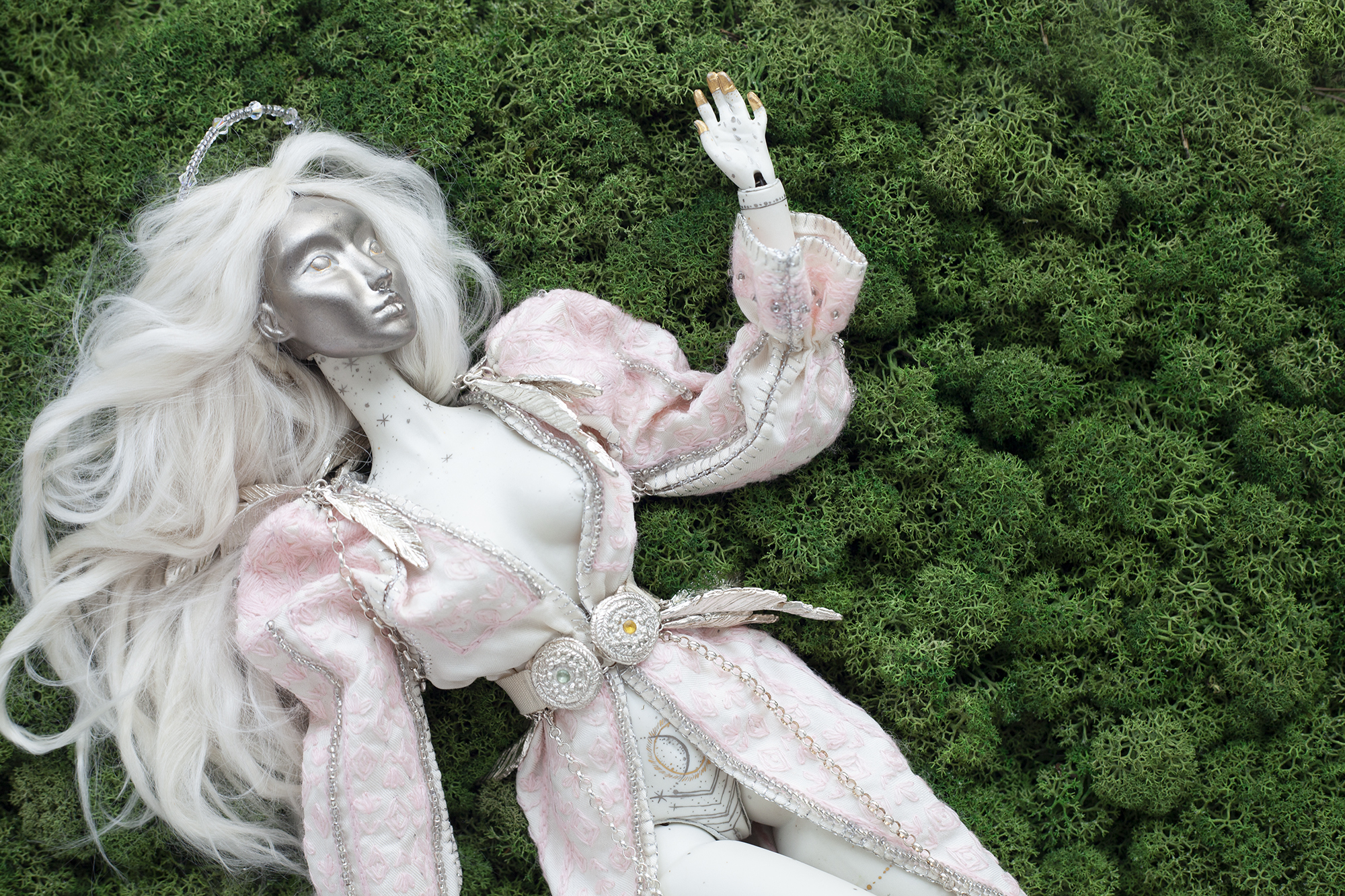 A luxury BJD (ball-jointed-doll) – a piece of Romanian culture & mythology, so universal in meaning, yet so particular in aesthetics and almost completely unknown to the world. Each and every symbol and decoration on the doll’s surface and clothing are relevant to its sacred self, the deity it represents.

In old times, long before ours, the Sun was a strong emperor, hid head being of gold and body human-like. He had a beloved sister, the mesmerising Moon, her head of silver and body also human-like. The mighty Sun couldn’t resist the amazing beauty of her sister and followed his melted heart, he decided to marry his sister, The Moon. God saw everything, as he does today, and decided to do everything he could to stop the wedding from happening. So, He stole the saddened Moon from the wedding ceremony and hid her in the water, so that the Sun would never find her. As the Sun’s investigation approached the place where the Moon was hidden, God placed her graceful being in the sky. Therefore, when the Sun went to sleep, she would appear, her head lighting up the night sky with a softer, sweeter light. She searched around her and found Sun’s teardrops (which were invisible in the powerful light that he shone during the day), small and sparkling, which we today call stars.

“When the two met for a moment on the same sky, they said nothing from there on, took a last glance at each other and, saying their goodbyes with tears in their eyes, left to wander the world, to forever look for each other and never meet again.” IULIA GORNEANU

Limoges Porcelain/ Painted with Gold & Platinum Luster/ Swarovski crystals / Silver jewelry/ Jewelry contain 10 different Sapphires / Hand embroidered costume / Completely handcrafted. Every doll is made to order, that’s why differences from the photos featured on this web page may occur. Small imperfections are the guarantee of the high quality of the doll and its hand-made nature – we call them “birthmarks”. Sensitive to scratches.