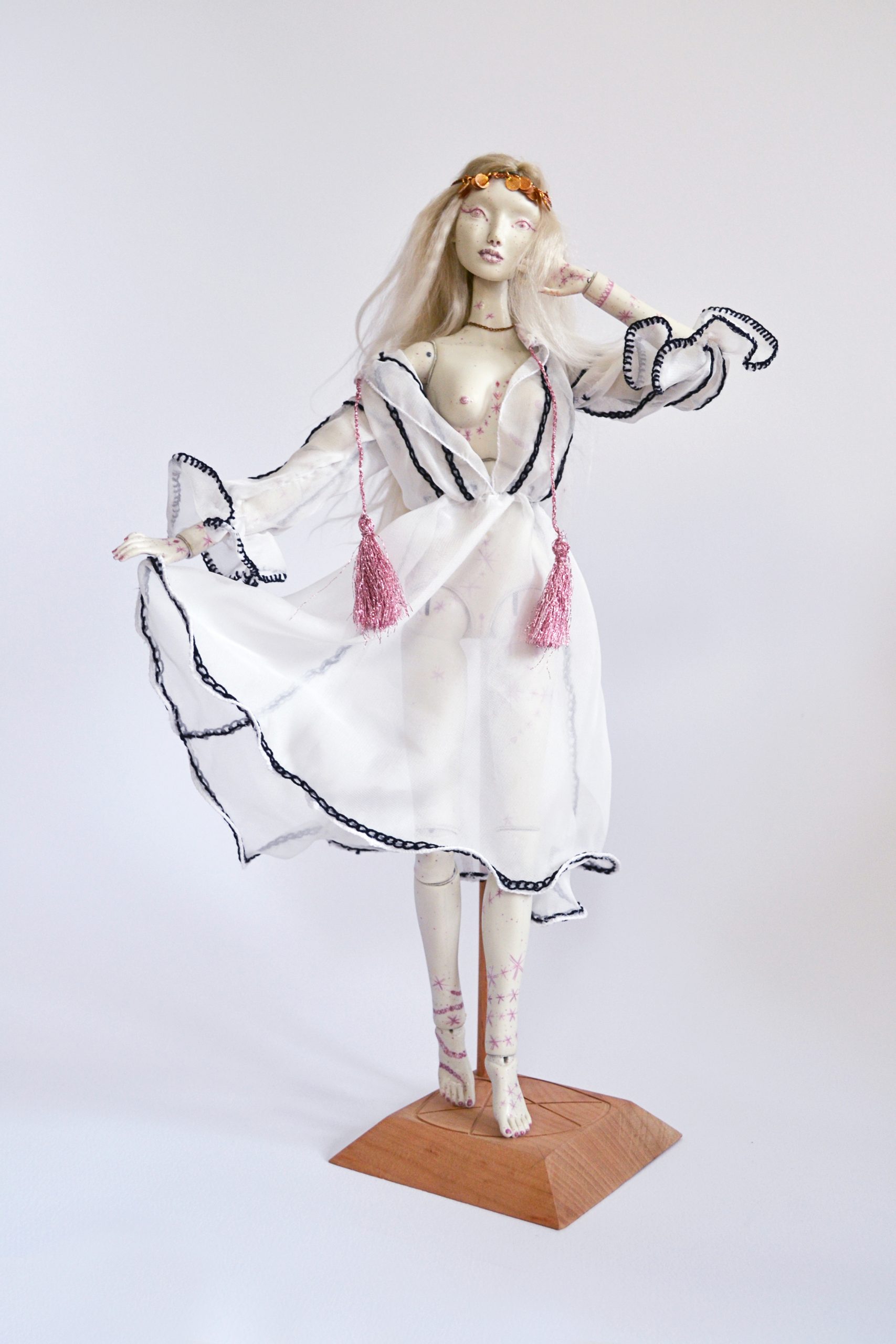 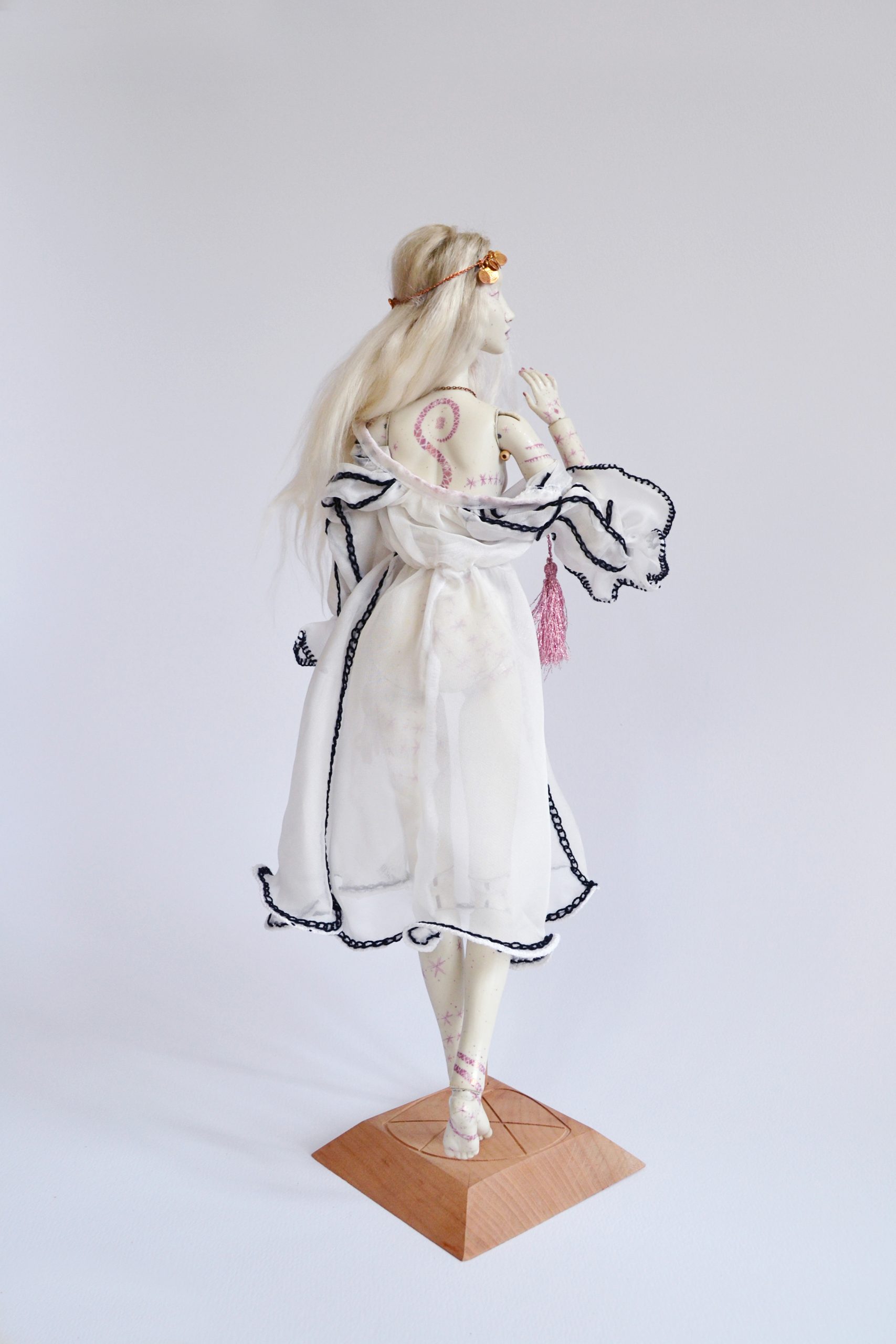 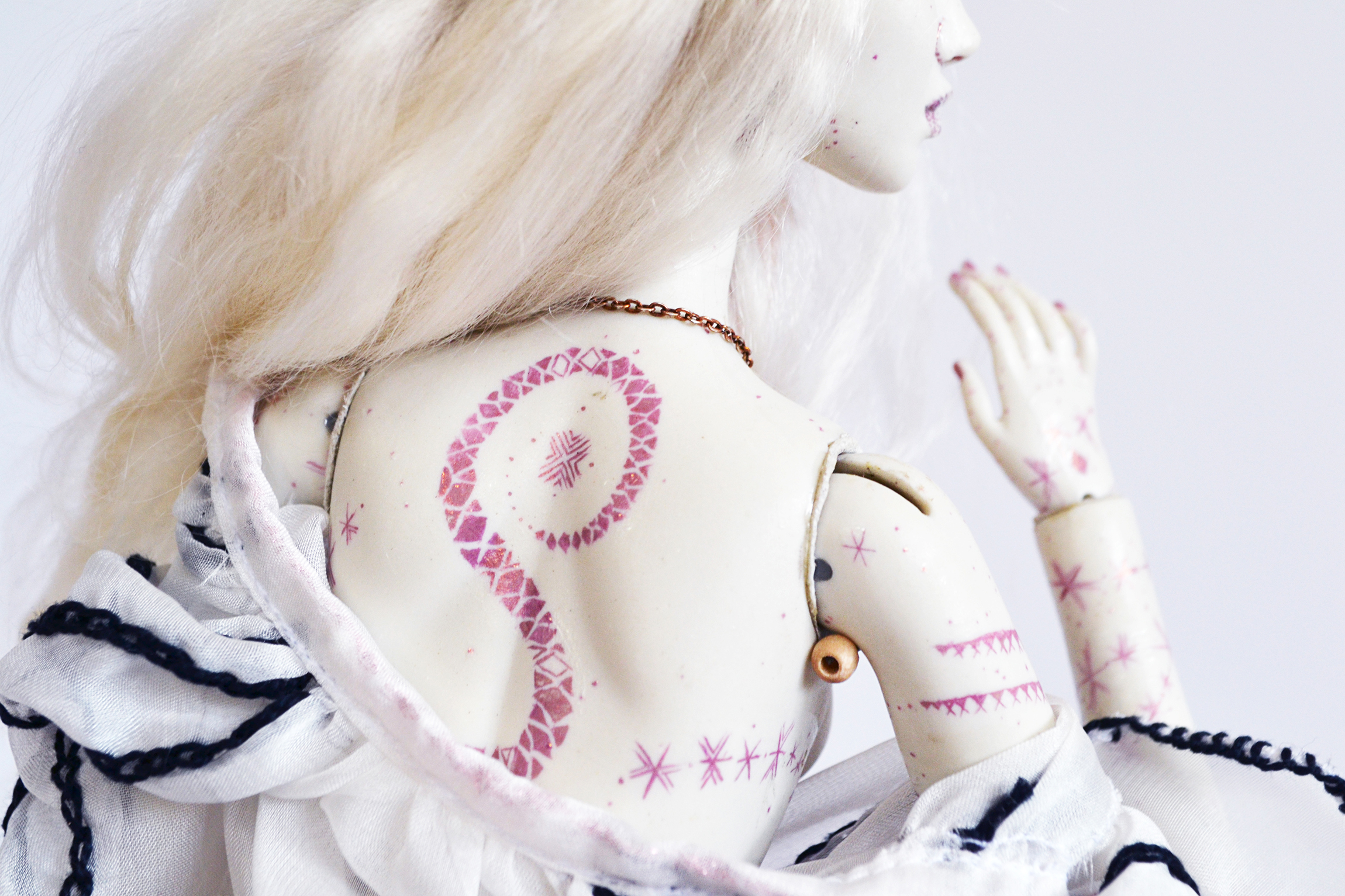 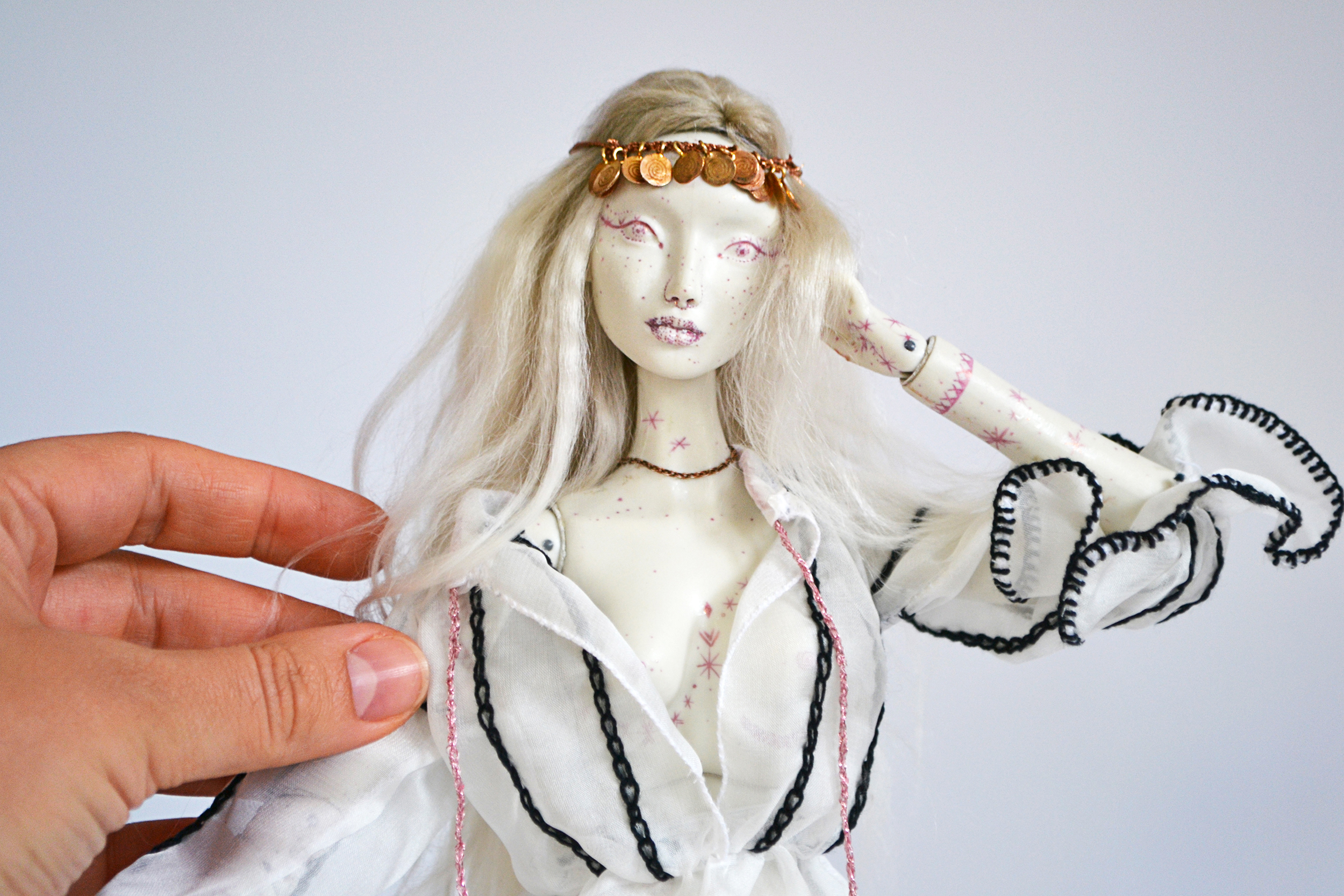 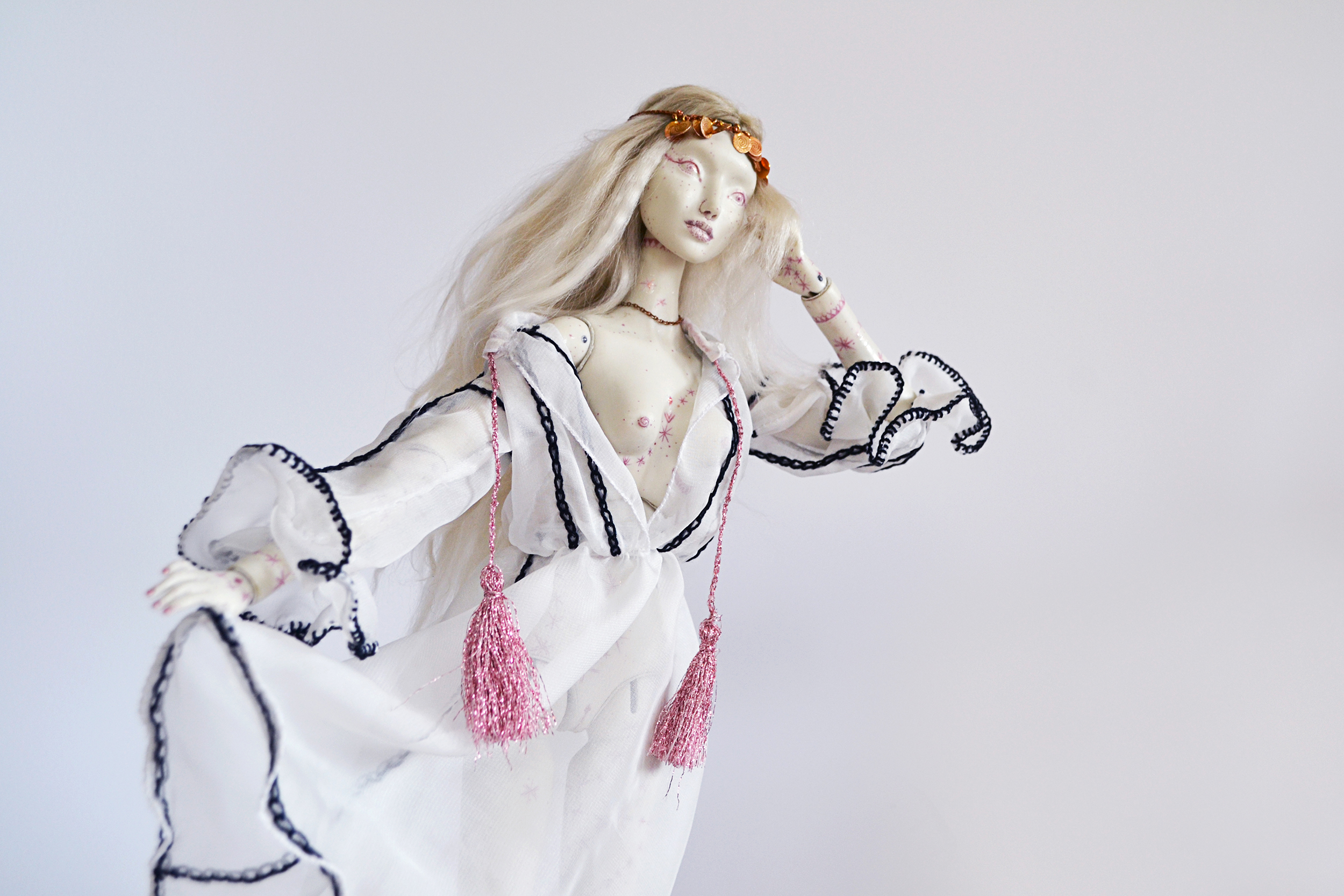 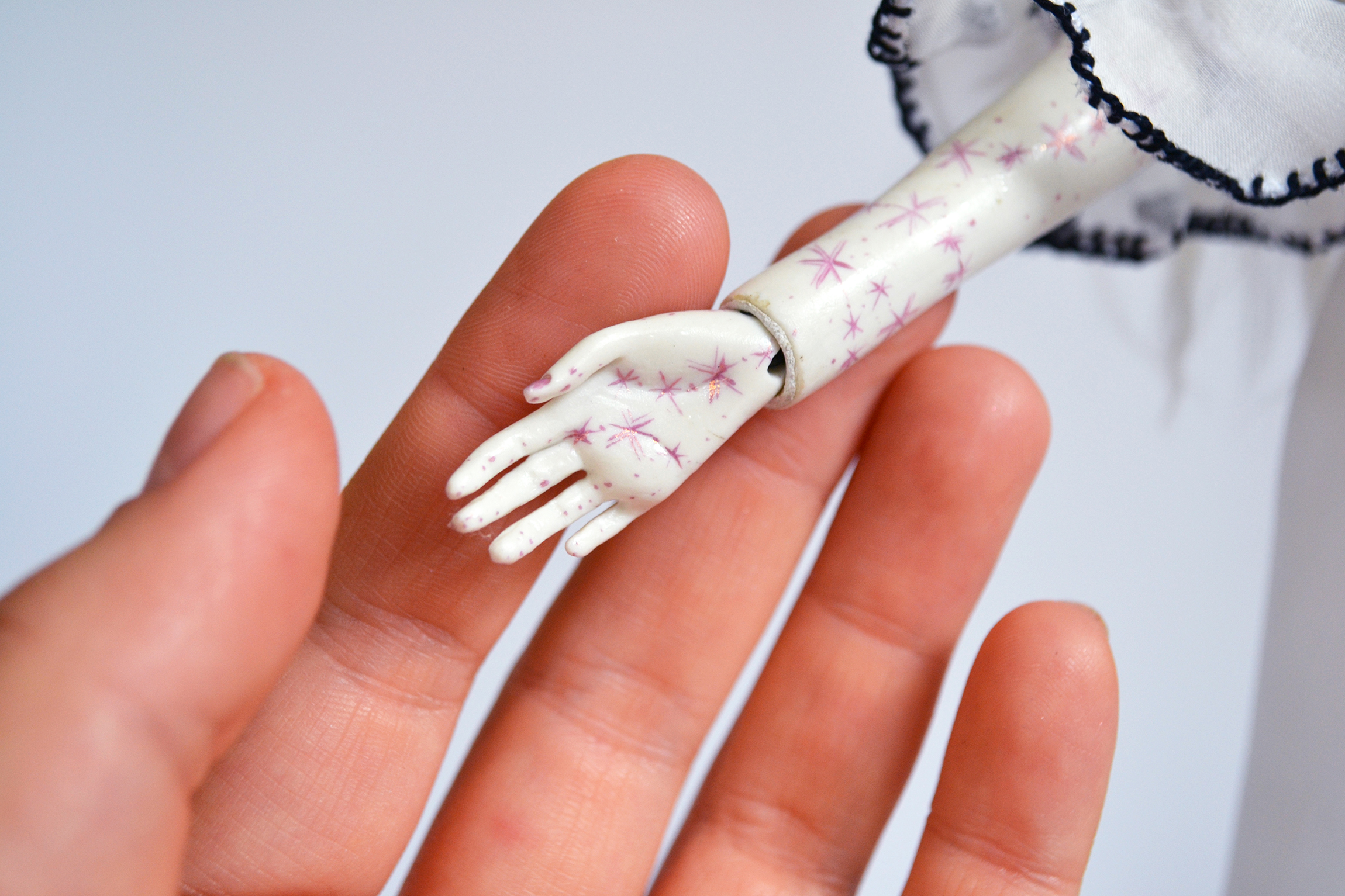 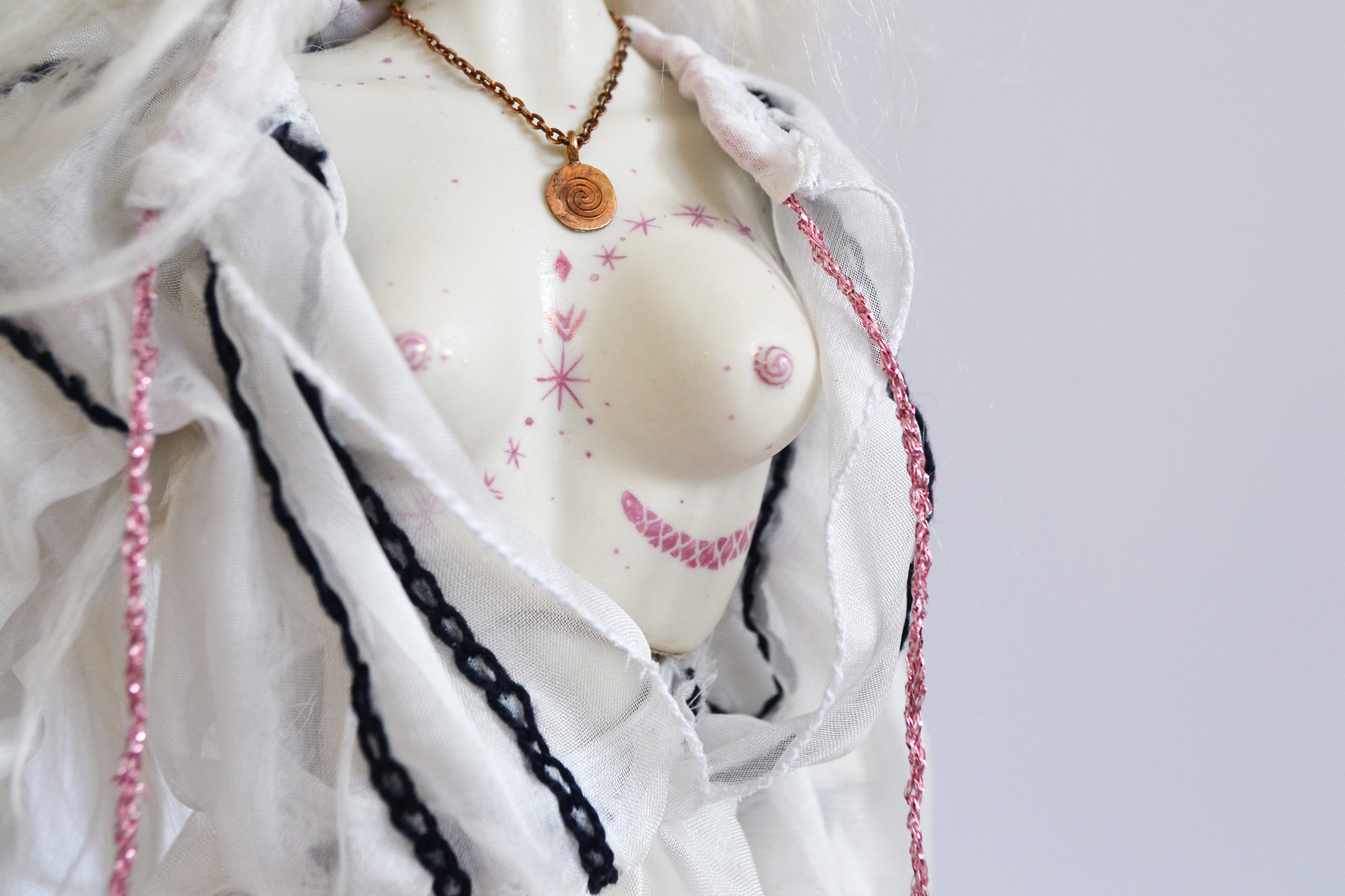 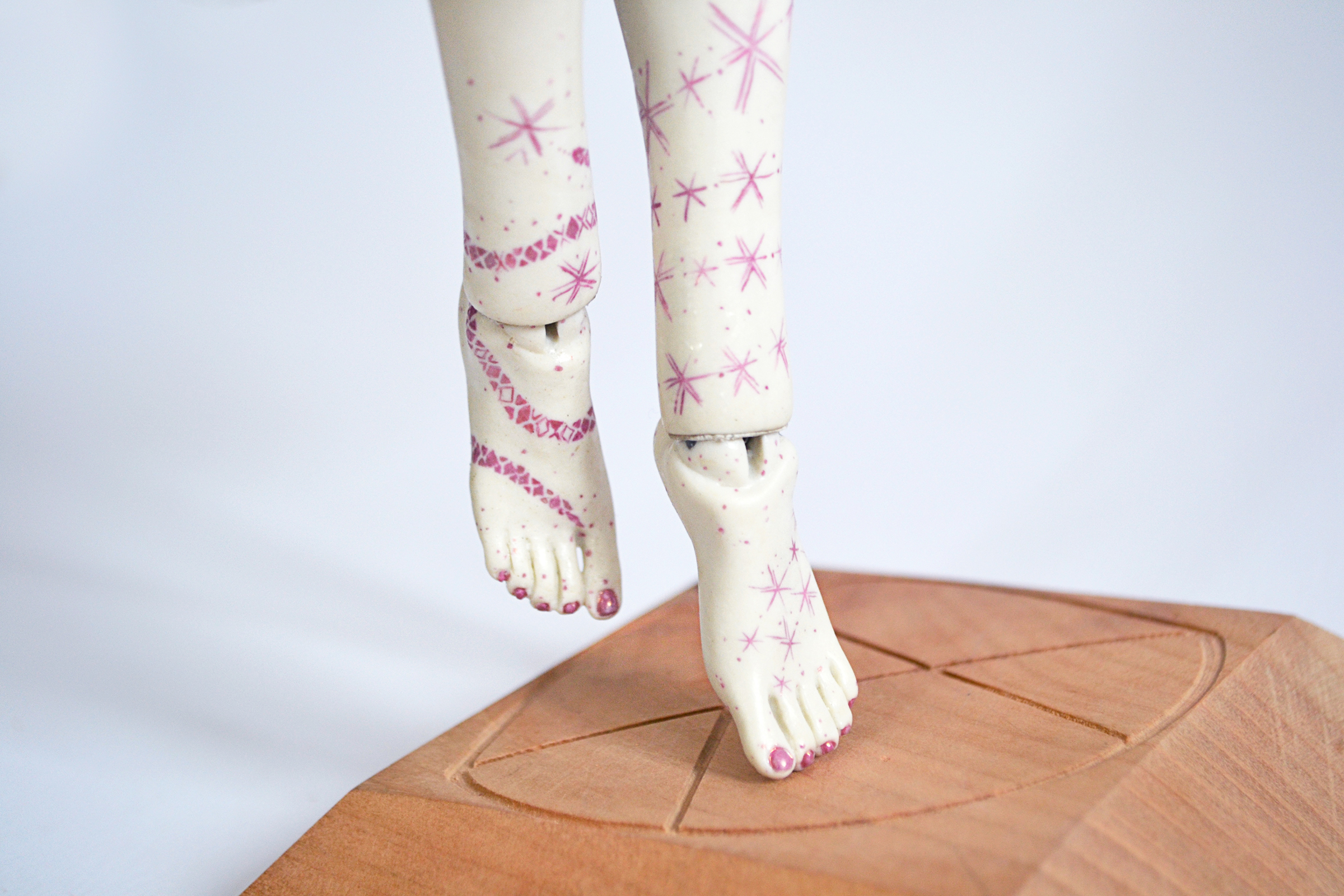 A luxury BJD (ball-jointed-doll) – a piece of Romanian culture & mythology, so universal in meaning, yet so particular in aesthetics and almost completely unknown to the world. Each and every symbol and decoration on the doll’s surface and clothing are relevant to its sacred self, the deity it represents.

In Romanian mythology, the demigod Dragobete (a local version of Cupid – the personification of love) would roam the earth starting with the end of February, a period that coincides with the revival of nature & the time when the birds would mate. Fertility is very often associated with the feeling of love, so the Dragobete would “travel” accompanied by a number of Love fairies. According to ancient legend, they would have been created to bring balance & warmth in the hearts of humans in a time when they would have forgotten all about these divine qualities.

“According to the sexogenic myth, (…), the Nefărtat (anti-Creator) would have separated the androgynous humans, with the silent consent of the Fărtat (Creator). This separation was meant to bring domination of the separate parts, of each through the other and of both through the sneaky interventions and the intrigues of the Nefărtat. Late in the night of time, The Fărtat took notice of his brother’s schemes. According to t the erotogenic myth, the Fartat tried to ponder, as much as possible, the exceeding lustful nature of the Nefărtat dominated humans, by introducing to the partners empathy and mutual affection, devotion & abnegation. In order to consolidate his project, he sent into the world the Dragoste (The Love fairies), mythical creatures (…) created especially with this purpose. Delicate being, the Dragoste enhance the beauty of the ones who love each other and darken (…) and bring into consciousness the darkness of the ones who hate. They add to the spiritual experience of those who love the values of respect, greatness & humanity.”

The Dragostea doll was crafted to suit these qualities. She is painted with symbols of the universe, stars and other wonderful cosmic elements, showing that her home is not Earth, having come from other places & dimensions. She has two serpents painted on her body – one is for protection, the one that twirls to her back, symbolizing the Fărtat or the Positive force, and a second one is swirled around her foot, symbolizing the Nefărtat, who can’t get higher because of the light that the Dragostea radiates (also symbolized by the stars). She is dressed in traditional wear, wearing a crown of gold plated silver coins, which is traditionally worn by young women when getting married, a custom found in certain parts of Romania. This crown it signifies wealth, abundance, and in this particular case, this wealth is of a spiritual kind, given the symbol of the spirals of life engraved on the coins. Therefore, the Dragostea showers humans with the spiritual wealth of love.